Breathtaking vistas, the deep-rooted rich culture of ethnic groups, lineups of majestic mountains, and the tireless serenity of it all. If just reading that gave you a bit of chill, Kanchenjunga  Trek is one of those few special endeavors you shouldn’t pass on.

Residing right on the border of eastern Nepal and north-western India, Kanchenjunga is the third highest mountain in the world, soaring high at 8,586 meters (28,169 ft).

The pristine beauty is one of the great glories of the Great Himalayan Range.

Translated to “Five treasures of the snow” in Tibetan, Kanchenjunga is spread out like a massive cross. Thus, the trek to the base camp can be tackled via two common pathways, north and south. The Kanchenjunga Base Camp is in the restricted region of Nepal. The permit to do so was granted only in the 1980s.

Lush hills blanketed in all varieties of trees and flora, waterfalls, larger than life suspension bridges, and enormous glaciers will greet you throughout your expedition.

You will also pass through the Kanchenjunga Conservation Area, which houses an array of many precious endangered species, such as the Himalayan black bear, snow leopard, red panda, blood pheasant, etc.

The springtime from March to May, and the dry months of September through December would be recommended as the best time periods to visit the base. Checking out the Kanchenjunga Base Camp Weather to ensure you get the best of the trip is highly advised.

Interesting facts on the Kanchenjunga Base Camp

Since there are two different takes on the trail to this massif, let’s have a look at each one of them so you could find your ideal pathway to one of the most heaven-like places on earth.

Kanchenjunga Base Camp Trek Itinerary from the North 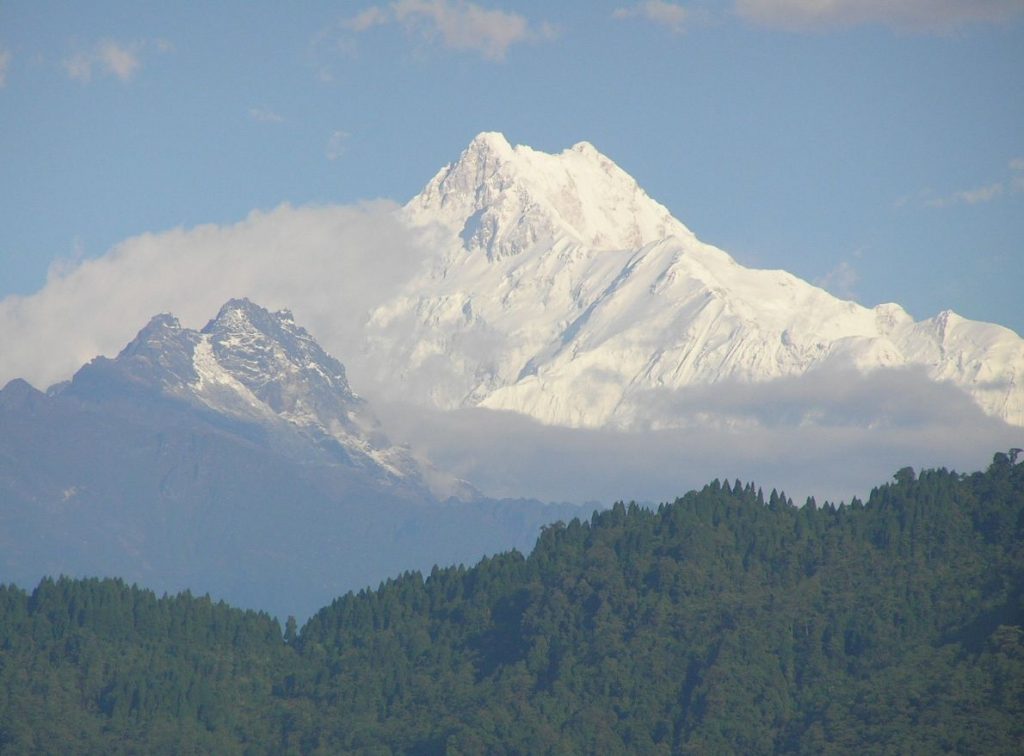 An arrangement of a custom itinerary as per your needs and convenience is also possible. 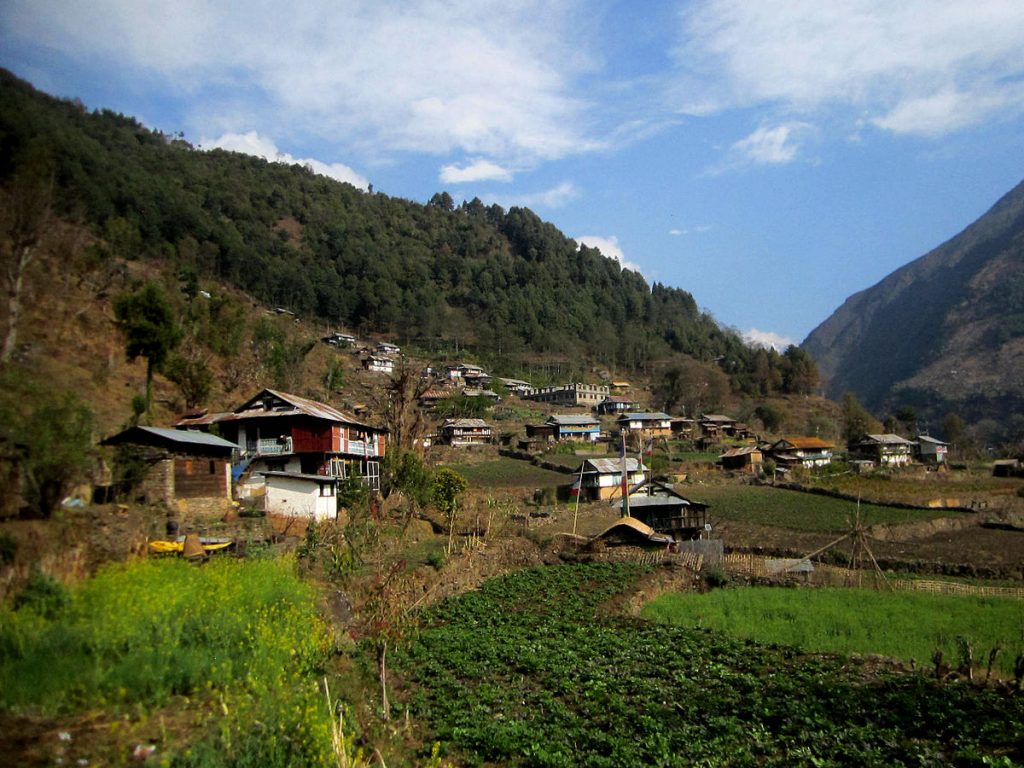 The trek officially kicks off at Taplejung, but a 45-minute flight from Kathmandu to Bhadrapur is inevitable. From Bhadrapur you’ll be driven off to Birtamod where you will stay over for the night. Next morning, you’ll head to Taplejung, which is a good 8-10 hours away.

Throughout the ride, you will notice modern settlements of people thinning considerably, and being replaced by lush fields and pastures. Arriving in Taplejung, you will spend another night with little to no fatigue, considering what’s ahead.

The actual trek begins when you’ll start your day by descending towards the village of Sinuwa from Taplejung. The 7-8 hour hike might seem quite overwhelming for the very first day, but don’t let that intimidate you. The perfectly asymmetrical terraced fields, warm glances from friendly locals, and hills brimming with luscious trees of all sorts, all while the glistening Tamur River accompanies us, will make the hike very much worthwhile.

After a night in we will walk towards Chiruwa market, the Tamur River still on our sides. By the time we reach Taplethok, another memorable day goes by.

The next day we cross a river originated from one of the giant glaciers within the circuit of the mountain. Steep ridges should be of usual occurrence by then, and after passing by yet another one of them, we will reach the Ghunsa Khola Valley. Once we arrive at the converging point Tamur and Ghunsa Khola, we will have reached Sakathum.

Heading towards Amjilosa from Sakathum, for approximately 7-9 hours, you’ll come across steep passes. The ascent from Amjilosa to Gyable will reward you with an astonishing waterfall right in front of your eyes.

Leaving the charming Gyable behind, we reach Ghunsa, the unofficial capital of the valley. Comprised of Tibetan people as the majority of the population, the village is a breath of fresh air.

It leans more towards the sustainable side as well, equipped with their own school, health post, and even a micro hydropower plant. You will also have your very first acclimatization day in Ghunsa. For the hike, you will walk to the other side of the Ghunsa Khola, and return likewise. The tiny bustling life in the middle of steep hills, rivers, and indistinct trails will surely have you sleeping in good spirits.

Khambachen will be your last stopover before heading to the permanent sub-zero temperature area. The trek from Ghunsa to Khambachen is quite lovely since most of the hills are engulfed in Pine and Rhododendron forests.

As you’ll be nearing the principal area of the trek, you will reach the source of the Ghunsa Khola. After trekking next to the glacier for a couple hours, you’ll reach Lhonak. Not the best in comfort, but undoubtedly an amazing feast for the eyes.

The landscape and the snowscape all around you will keep you on your toes.

Lhonak to Kanchenjunga Base Camp 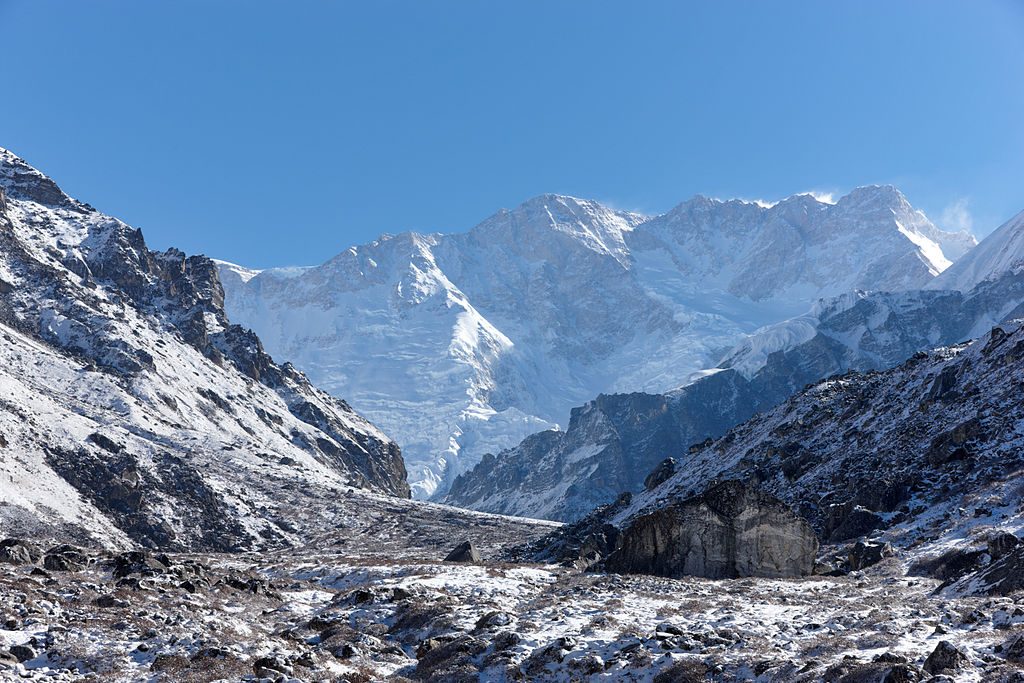 You won’t be able to contain your excitement while heading to the Kanchenjunga Base Camp from Lhonak. Following the same glacier as yesterday, you will, at last, be standing on the KBC, also known as the Pang Pema, at an altitude of 5140 meters (16,864 ft).

Feel free to take your time and take in all the hard work from the past week, while looking at the marvel around you.

Back to Lhonak, Ghunsa, and up Sele La Kharka to Tseram and Ramche

Back to Lhonak for the night, and to Ghunsa the next day. From there you’ll trek to Sele la Kharka, just above the high pass. Next day you will trek through not one but two significant high passes; the Sele La Pass (4480 m) and Sinion La (4600 m). After the second pass, a sharp descent of 1000 meters will get you to Tseram.

From Tseram, the walk towards Ramche will take up to 3 hours. From Ramche, you can hike another 2-3 hour and visit the Kanchenjunga Base Camp in the south as well.

Descent from Ramche to Tseram for 6-7 hours. Pass through Simbuwa Khola in the descent that’ll be continued from Tseram, towards Lamite Bhanjyang. The Bhanjyang will take you through Amji Khola and vivid flora, then further down to Yamphudin.

From Yamphudin, you will be accompanied by Kabeli Khola, surrounded by dense, evasive pine forests all around. You will soon reach Phumphe, and thereafter through a few ascents and descents, you’ll stay in Kunjari for the night.

Kunjari to Taplejung and Bhadrapur and back to Kathmandu

The last trek of the whole expedition, you will need to walk uphill from Kunjari back to Taplejung. Might not be the most forgiving trek for the last day, so mentally prepare yourself beforehand.

From there, a day of a long drive will bring you back to Bhadrapur. Thereon, you will take a flight back to Kathmandu and this remarkable journey will come to an end.

Kanchenjunga Base Camp Trek Itinerary from the South 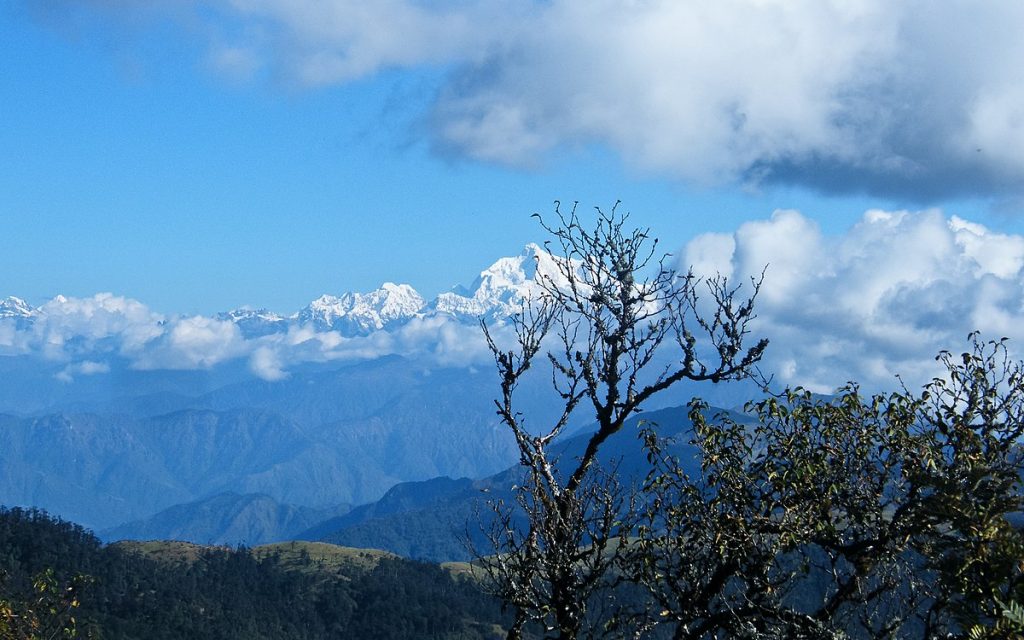 We are open to organizing this trek as per your need.

Given below is a general outline of the prospective itinerary that can be arranged as per your group and schedule.

Trekking solo at Kanchenjunga Base Camp is not permitted and it is mandatory that you be accompanied by a fellow trekker and a trekking guide from a registered trekking company.

The trek from the south is similar to the one from the north during the first days. It’s the same flight from Kathmandu to Bhadrapur, drive to Birtamod and a whole day in the bus through scenic landscapes that’ll lead you to Taplejung.

Taplejung to Simbu and Khesewa

Things change a bit from Taplejung, as opposed to heading for Sinuwa for the north side of the massif, you will slowly ascend towards Simbu.

The sight of this side of the hike is similar to the one from the north; gracefully imperfect and shining gently through the distinction.

After Simbu, you will walk towards Khesewa, and if you’re in luck, glorious sight of the mountains shall greet you.

Mamangkhe is very charming, beaming with Limbu culture, with some traces of other Kirant ethnics such as Rai as well. The cultural and ethnic significance of this place is so strong that there are many people who trek just to visit this fascinating place.

The trail that leads here is also known as the Limbu Cultural Trail.

You’ll reach Yamphuding after Mamangkhe. Yamphuding is considered the biggest village in the south side of the Kanchenjunga Massif. In your time here you will be kept busy by simply observing the noble way of life of people residing here.

The trek to Torongding is quite wearying, as the ascent could last from 7-9 hours. You will then walk for almost five hours to Tseram, with the landscape of tall forests and mountains splayed out around you.

From Tseram you’ll be required to trek to Ramche. The pathway through Ramche will lead you to the Oktang Base Camp, the south side of the Kanchenjunga Base Camp, and the highest elevation gain of the trek, at approximately 4160 meters.

After visiting the base camp, you will descend back to Ramche, Torongding, and then Yamphuding. This should take approximately 3 days of your time.

Khambine to Bhadrapur and Kathmandu 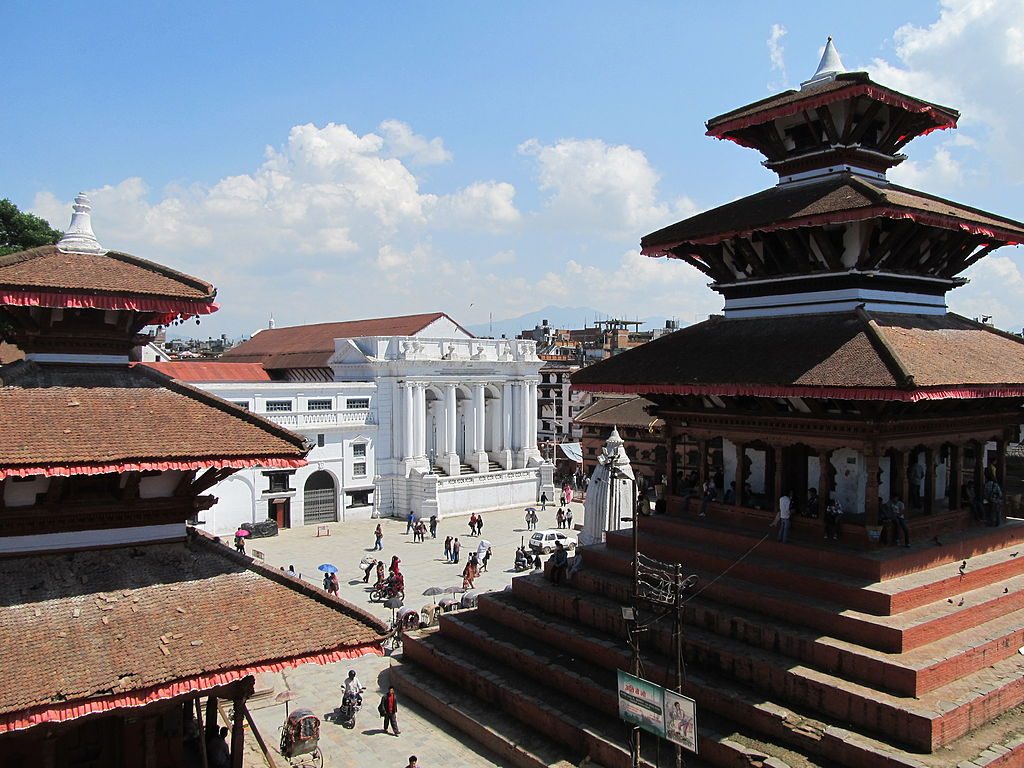 Similar to the north side of the trek, a day-long drive from Khambine to Birtamod will end you up at the airport of Bhadrapur. A flight back, and your impressive journey is officially over.

Whether you decide to opt for the trek via the North or the South side, there’s no doubt that the trip will be more than worthwhile.

While the North side of the trek is more commercialized with better facilities for, the south side will guarantee you more of the idyllic trait of the trail.

Contacting us and having a thorough discussion on the type of trek you’d prefer is highly advised. We will do everything in our potential to make this expedition your most memorable one.

Keep in mind that the trek to the Kanchenjunga Base Camp from either of the sides is not an easy one. From day 1 of being on foot to the last trek of the trip, the hours you will be required to commit to the trail will not be the most forgiving. The phrase, “Go big, or go home.” perfectly sums up this expedition.

Rest assured, the unforgettable views of the lush hills, striking mountains, sparkling rivers, and friendly faces smiling at you will not be compromised no matter which direction you choose to ascend the base camp from.