Nepal attracts thousands of trekkers from all over the world. There are several reasons that makes Nepal and exciting destination for adventure.

Firstly, the land composes of the Himalayan Range stretching along the entire northern region. Towards the southern region are low plains and grasslands. Secondly, Nepal has eight among the 10 highest peaks in the world giving you a chance to experience great altitude. And last but not the least, Nepal is rich in natural resources like forest conservations, freshwater bodies and wildlife inhabitants.

One among the many trekking routes available in Nepal is the Mansalu Circuit trek. The journey is towards the base camp of Mt. Manslu which is the eight highest peak in the world. The journey will take you as high as 3000m!

It hasn’t been long since the place was opened for foreign trekkers. It is situated in the restricted region and hence enquires a special permission from the government to trek in. There is no law as such but you ought to travel with a guide to Manaslu since the trails aren’t well marked.

The route leads you to beautiful landscapes including green hills, valleys, rivers, bamboo forests, rhododendron forests, gorges, several suspension bridges,  glacier lakes,  and areas covered in snow. The journey will also lead you to spectacular view points of several snow-capped mountains. The highlight of the trek is the highest point of the trek called the ‘Larkya La Pass’ which is widely believed to be one of the most dramatic pass crossing the Himalayas.

You will get a chance to explore several rural villages along the way. The lifestyle of these villages is well preserved and inherited from ancient culture. You will therefore confront unusual and exciting traditional practices. Most of the residents of these villages includes Sherpas, Gurungs and Magars. The Sherpa culture gains its roots from the Tibetan culture.

Mansalu is increasingly getting popular amongst the trekkers. firstly, the region is less crowded as it sees very less visitors as compared to other treks. Secondly, because it sees less visitors the path is less trodden. This allows the trekkers to experience nature in its purest form.  The route is wild and unaltered. The entire region is unstained by the influence of modernization. The residents are very simple and welcoming.

Mansalu is generally attempted by people who seek for challenging adventure. The trek comprises of high altitude and relatively rough trails. Hence it also demands a certain level of physical fitness. But if determined enough, one with no prior experience can also enjoy this trek. With enough days of acclimatization and shorter walks per day, one shouldn’t have any problem completing the journey with ease.

A major part of the land still remains unexplored. Like Mansalu, there are many other restricted regions that were recently opened for foreign recreation. You can easily get into contact with any one among the many reliable trekking agencies of Nepal. If you are looking for something more challenging then you can attempt mountain expeditions. But if you happen to be an amateur, there are several other treks for you to enjoy. 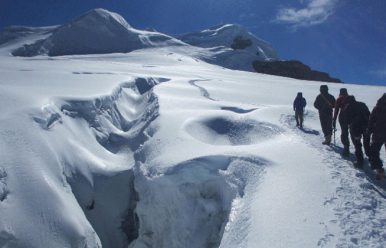 Nepal is the perfect place for adventure seekers. There are lots of challenging as well as easy climbing routes. Mera Peak is among the challenging yet beautiful routes. The tallest trekking peak in Nepal, Mera Peak stands at an altitude of 6,476 m. And with …

Kathmandu is the city of beauty, culture, and entertainment. Exploring this magnificent city is like an adventure in itself. And, if you don’t know where to start from, Thamel is the right way to go. The list of things to do in Thamel is endless. …