When you’re making up your mind for Mardi Himal Base Camp trek, be sure to collect as much information as you can on the weather and temperature of the trek route. Afterall, it is the climatic conditions of the place that sets up your trekking experience.

The rain and humidity, the chill and the snow, greenery and the freshness in the Mardi Himal Base Camp trek route molds your trip into an adventure.

Mardi Himal is a treasure and Mardi Himal Base Camp Trek gives you a slice of the pristine and mysterious mountain. The magnificent Mardi Himal nestles east to the Annapurna Base Camp which is a legendary trekking destination.

The trek goes along narrow alleys, following the enchanted rhododendron forests until you climb out and reach at an elevation around 3,300 m. The actual trek begins from High Camp (3,580 m) just above the “Middle Camp”.

Though the country caters trekkers in all the different seasons, the spring and autumn are the best time of the year.

Allow us to clear all your queries specifically on Mardi Himal Base Camp weather and temperature.

Spring at Mardi Himal Base Camp

Spring (March – May) is one of the best time of the year to unleash the true beauty of Nepal. It is the color of the flora and fauna that attracts a large number of trekkers this season. It creates a picturesque foreground for the spectacular mountain vistas.

The clear blue sky and the easy sight of the mountain throughout the trek are simply spellbinding.

The temperature may rise up to 20 degrees and the average would go anywhere from 17 degrees in the daytime. Since winter just passed by, the mornings and nights are no longer freezing.

It is the perfect temperature for trekking to the Base Camp.

The blooming Rhododendron forest and the rich biodiversity this season is spectacular. 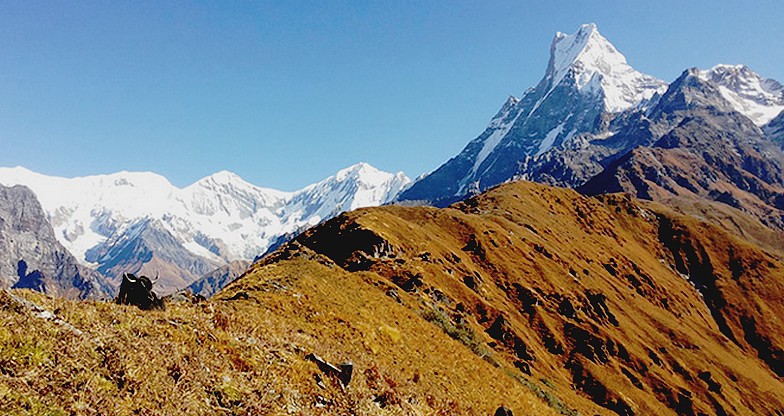 Monsoon at Mardi Himal Base Camp

June heralds the arrival of summer which continues until August. Summer in Nepal is different as it is also monsoon season. Pokhara- the wetland of Nepal is also the starting point to Mardi Himal Base Camp. This tourist-friendly city witnesses the most rainfall in the country.

But the weather usually clears up after the downpour. This is great news if you are eager to capture spectacular views.

Because this is not a peak season, you can enjoy the peace and serenity by yourself. Also, tea-houses offer amazing discounts during this season. Be sure to enjoy their undivided attention.

The rain clears up the dust providing you with the best view of the green landscape.

The average temperature will go up ranging from 10 to 23 degrees. Due to the occasional downpour, the temperature is around 5-10 degrees in the mornings and evenings.

Be sure to carry your rain gear like rain jackets, a strong and sturdy trekking boots. Also, pack your waterproof socks and trekking pants. Most importantly hire a licensed professional trekking guide.

Autumn at Mardi Himal Base Camp

Autumn is the best time of the year to trek in Nepal. No doubt Mardi Himal Base Camp is exceptional. The surrounding gets cleared up by summer monsoon.

The sunrise and sunset on a clear day are absolutely breathtaking. The mountain vistas glow in the yellow gleaming beauty of the sun, the weather multiplies the beauty.

It is around 20-degree Celsius during the day while it drops to 5 degrees during the night. Changes of rainfall are almost nil. But you could experience slight rainfall during early September.

You might not need to carry bulky winter clothes during this season.

As Autumn comes to an end, you will have colder days and nights indicating winter to be just around the corner. If you trek towards the end of November, be sure to pack warm clothes.

October is the best month to be here in Nepal. So, pre-booking is absolutely necessary. Allow us to take care of that.

Winter at Mardi Himal Base Camp

December-February is winter in Nepal. And when on a trek to the Himalayas, the temperature definitely drops down. The temperature lessens by 5-degree Celsius with every 1000 meters increase in altitude.

Winters are dry with negligible chances of rain.

The bright days bring out chilly morning and nights. The trekking trail is not crowded and you can enjoy your peaceful time. Also, you can have plenty of option of choosing the best possible accommodation.

The daytime temperature scales between 9-12 degrees. During the mornings and evenings, it reaches to – 5-degree Celsius.

Crampons and thick insulating jackets and sleeping bags are highly suggested. Of course, you will have blankets, warm tea, and a fireplace at your accommodation too. 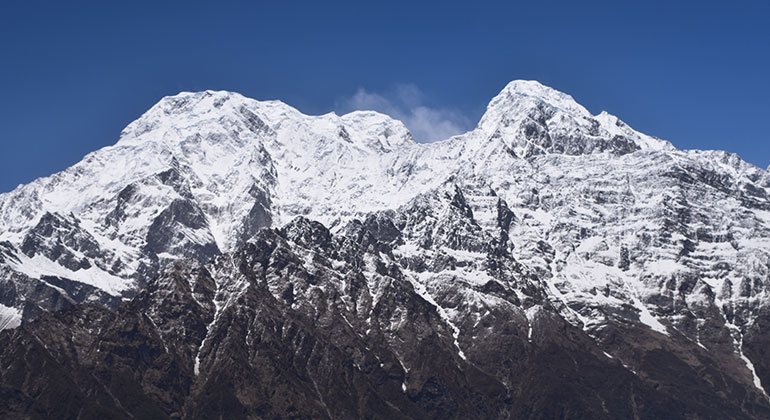 Mardi Himal Base Camp trek is a short trekking package for trekkers looking to experience the thrill within a short period of time.

This peaceful trek takes you to the Annapurna Trekking Region. It is on the lap of Machhapuchhre Himal which is yet another gorgeous mountain.

Trekking is definitely best when the weather is in your favor. But there are a lot of factors that contribute to making it worth. No matter the weather or the season, it is best to choose the season you are most comfortable in.

You might be comfortable during winters. But if you choose to trek during spring or summer’s just because it was the best time for others, you might not fully enjoy it.

Every season gives you a different experience. With a bit of preparation trekking to Mardi, Himal Base Camp is possible and doable any time of the year.

For further queries and detailed information on Mardi Himal Base Camp, do contact us. 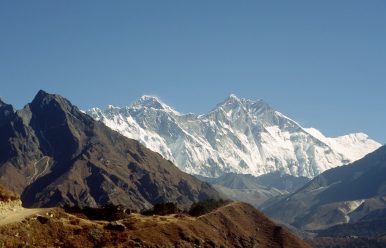 If you are short of time yet wish to trek to the Everest Region, a short trek in the Everest Region is the best choice for you. There are a number of short Everest Treks to suit different needs and preferences. From easy to more … 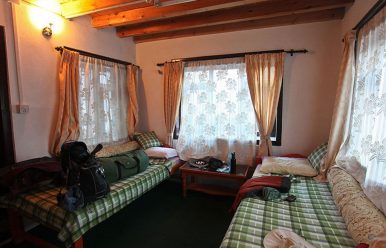 Thousands of tourists mostly visit Nepal every month and most of them are here to trek. Everest Base Camp Trek is one of the most famous trekking destinations here. Mount Everest is definitely the reason behind it. Getting to the footstep of Mount Everest is …