Nepal houses a number of prominent peaks. 8 of 14 Eight Thousanders and several mountains higher than 7000 m lie here. Here we are listing down  the eight tallest peaks of Nepal.

Mount Everest is not just the highest peak in Nepal but it is the highest peak of the world too. Sagarmatha, meaning forehead in the sky, or the forehead of the sea, is a proper name for Mt. Everest as it looms over everything in the world at a height of 8,450m. Being the highest, it is also the most popular among the trekkers and climbers. Thousands of people from all over the world come to Nepal in hopes of standing at the top of the world or to view it up close from the Everest Base Camp. However, the full view of the Everest can be enjoyed from Kalapathar rather than the Base Camp. Kanchenjunga lies in the northeast of Nepal. Once thought the highest peak of the world, it is now known to be the third highest in the world (8,586m). The name means ‘Five big treasures of snow’ referring to its five summits. Only two of these summits are in Nepal. When trekking to Kanchenjunga, only the Nepal side can be visited. It is a restricted area and a special permit is required. It is also mandatory that there be at least two people in the group and a licensed guide. The climb is technically challenging and may be home to yetis! Known as “Kangchenjunga demon” there is a myth of a bipedal human-like beast. It is also believed that somewhere between the mountains is a valley of immortality. We offer an exciting Kanchenjunga Trekking to view the beautiful KanchenjungaMountain. Lhotse is 8,516m high, the fourth highest peak of the world and the third highest peak of Nepal. It was first climbed by Swiss team of Ernst Reiss and Fritz Luchsinger. It lies south to Everest and is joined by a ridge. At the beginning it was considered a part of Everest massif and was named E1. Its name Lhotse in Tibetan also means “south peak”.

Lhostse is the least climbed mountain in Nepal. The route follows Everest till Camp 3 and then moves towards Lhotse. It is a steep climb and requires a very fit and capable climber. It is difficult and requires different government permits. The fifth highest mountain Makalu is 8,485m tall. It is 4 sided pyramid shaped and one of the most difficult mountains to climb. The climb is very steep with sharp exposed ridges that demands expertise in rock/ ice climbing. A French group was the first to summit it in 1955. It is a part of Mahalangur Himalaya and lies within Makalu-Barun National Park, a strictly conserved area. We offer an exciting adventure called Makalu base camp trekking to cherish the beauty of the Makalu region. Cho Oyu comes sixth in height at 8,201m. The meaning of its name is usually said to mean “turquoise goddess” but it could also mean “bald god” which makes more sense according to the legend of bald god turning his back on goddess Chomolungma (Everest) after being rejected by her. It was first climbed by two Australians and a Sherpa and is considered the easiest of Eight Thousanders to climb. It is now popular with the skiers and snow boarders. Near this mountain is a 19,000ft glacier pass called Nangpa La Pa, a trade route between Nepal and Tibet. Dhaulagiri means “white mountain”. Mistaken as the highest in world before Kanchenjung replaced it, Dhaulagiri is actually the 7th with the height of 8167m. The climb is fairly easy. There is only moderate avalanche danger and very less technical parts. The first successful climb was by and Austrian and Swiss team. We offer an exciting Dhaulagiri trek to view this magnificent mountain. Manaslu is the 8th mountain height wise but 4th in terms of danger. It has high fatality rate. The lower area is prone to avalanche and the peak is steep and sharp. The first to conquer Manaslu was an all-girls’ team led by Yuko Maki in 1956. They were also the first women to climb an Eight Thousander. The name Manaslu translates to “Mountain of the spirit”. After the first failed attempt by the Japanese, an avalanche wiped Pung Gyen monastery and the locals blamed the climbers for upsetting the spirit. Manaslu Circuit trek to view this magnificent peak is rising in popularity and is also considered to be the next Annapurna circuit trek. The tenth highest mountain Annapurna was the first Eight Thousander to be climbed. It was done by Maurice Herzon and Louis Lachenel in 1950. Annapurna means “fulfiller of grains” and is worshiped as a goddess of harvest. The range extends for 34 miles and includes other high peaks. The 10th tallest peak is called Annapurna I which is also the tallest in the range. It is a popular area for trekkers and climbers alike. We offer several trekking trail such as Annapurna Base camp Trek, Annapurna Panorama Trek, Ghorepani Poonhill Trek etc to explore the beauty of the Annapurna region and view the magnificent Annapurna range.

We have only listed the peaks of Nepal with the height over eight thousand. There are many other mountains like Gyachung Kang, Annapurna II, Himalchuli, Ngadi Chuli, Nuptse; all above 7800m and several more above 7000m. 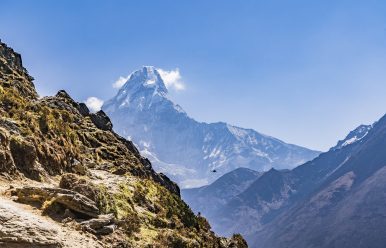 Trekking is a mixture of adventure, beauty and personal experience and nothing affects this mixture like proper timing. The weather and climate of a place ensure that every moment of your vacation is an excellent, memorable experience. While most trekkers believe Spring and Autumn to …

Annapurna Circuit Trek covers a diverse range of landscape and climatic conditions. Hence, the weather within the same month can be different. Trekking here is possible and beautiful throughout the year. Yet, one of the best months to do this fabulous trek to Annapurna Circuit … 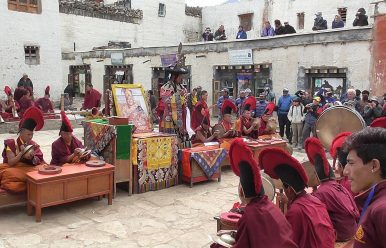