Mustang literally means “fertile land” in Tibetan language. Once the capital city of the ancient kingdom
of Lo-Manthang, till today Mustang is one of the most unscathed places on the earth, a far cry from the postmodern world of today.Upper Mustang trekking is definitely one of the most enigmatic and unforgettable trek you will embark on.

What makes Upper Mustang Trek fascinating is, up until 1992 AD Upper Mustang was a restricted demilitarized area which makes it the most conserved region in the world.

Mustang is tucked away from the rest of the world, right to the north of the major Himalayan range of Nepal. Despite of the hardships and adversities; happiness and joy sprouts from ever smiling, warm faces. Every single piece of rock and centuries old monasteries which carries a unique story greets you in your Mustang Trek footsteps.

The Upper Mustang comprises approximately northern two-third of Mustang District of Dhaulagiri Zone. Only in 1992, trekking in the region was officially started. It allowed only a few number of trekkers keeping in consideration the delicate environment and the ancient enclosed culture of the people.

A trek in this legendary Kingdom of copper red parched valleys, eroded canyon and deepest gorges decorated with yak caravans, colorful prayer flags and mudbrick houses in the backdrop of magnificent Annapurna, Dhaulagiri, Tukche and Nilgiri is your ultimate journey to Shangri-La. Experience the exotic culture of the mountain people like Thakalis, Tibetan and Gurung and be part of their strong culture that has survived for centuries in the driest place of the country.

The Upper Mustang Trek is fairly easy in relation to the gratifying experience it provides. We will trek along the permitted route of the Lo-Manthang to reach the maximum altitude of 3,840m. Join Nepal Eco Adventure’s Upper Mustang Trek, a 17 day journey to the land beyond the mountains, to the kingdom within a republic where till today the king is worshipped as divine.

Once you land at Tribhuwan International Airport (TIA), our airport representatives will kindly receive you and take you to your hotel, in a private car or a high-end tourist bus. Our representatives will brief you about the trek. After checking in, you can either explore this vibrant and exciting city on your own, or, take a cozy rest at your hotel.

Your sightseeing of this ancient city begins at around 8:30 am, after breakfast. A specialized tour guide and a comfy private vehicle will be available for your assistance. First we will visit the biggest Hindu temple of Nepal, Pashupati Nath, which predates to Lichhavi period. Then, to Boudha Nath, and Swayambhu Nath, shrines of lord Buddha, uniquely built in Shikhara style. The evening will be spent at Kathmandu Durbar Square, testimonial of middle age architecture. We will brief you about the journey that starts tomorrow. You can do some last minute shopping for Upper Mustang Trekking in Thamel or New Road.

Early morning after breakfast, we will travel to Pokhara via Prithvi Highway. The scenic bus ride will be around 6-7 hours long. We can see western Himalayans, on our way. Beautiful but tad tiring bus ride to the beautiful valley of Pokhara, it is our gateway to the mounts. We can explore around this beautiful lake city in the night or go for boating in the grand Phewa Lake. We will spend the night at the local Hotel.

We will catch a plane from Pokhara to Jomsom, headquarter of Mustang. It will take around 20 minutes to reach the beautiful town of Jomsom. We will fly North-West from Pokhara towards great portal between Annapurna and Dhaulagiri. You can enjoy beautiful views of the lofty hills and mountains during your flight. From Jomsom, we will trek uphill for 3 hours alongside Kali Gandaki to reach Kagbeni, the gateway to Upper Mustang. The village is located at the bank of two rivers. We will spend the night in a Guesthouse.

We will continue the trek towards the east bank of the Kali Gandaki climbing through numerous ridges and reach north to the Tangbe village. This picturesque town is a labyrinth of narrow alleys amid white-washed mud and stone houses, buckwheat fields, and apple trees. The majestic Nilgiri domintates the southern sky of Kagbeni. From there, we will hike to Chhusang village for 2 hours and then cross the dwindling Kali Gandaki. We will climb up to huge red mass of Conlomerate that had fallen from the cliff above, forming a tunnel through which Kali Gandaki flows. Crossing the Kali Gandaki Valley, we will climb uphill to tiche Chele. We will be able to witness the slow transition in culture, from Manangi culture to Tibetan. We’ll spend the night in a Guesthouse.

The trek goes along a steep barren land, alongside the copper red canyon. We will make a gradual descent to some Chortens on a ridge, and after hiking downhill for some more time we will reach the beautiful village of Samar. From there, we will climb a ridge and descend into a giant gorge. We will continue our trek through another valley, fields, cross a stream and climb up a ridge which lies at 3,800m. We will climb yet another pass, go through another ridge and trek downhill to Syangbochen. Overnight at Guesthouse.

From Syangbochen, we will gently hike uphill to a pass at 3,770 and trek downhill to reach the village of Geling. From Gheling, we will go uphill passing through fields to the center of the valley. Then we will climb a tough terrain across the head of the valley to the Nyi La pass (3,840m). From there we will climb, downhill for half an hour to reach a trail junction; the right trail is a route to Charang while the left one will take us to Ghami. It is a village of clustered white washed mud and stone houses canopied by an overhanging cliff. Overnight at Guesthouse.

We will trek to the driest part of Mustang today. It will be a tiring trek in this rough terrain. However, on reaching our destination, we will be rewarded with splendid views of the remote countryside, and Rocky Mountains in all directions. On reaching Charang, a large village at the top of theCharang Chu Canyon, we will take a rest. On the east of the village, there’s a big fort from the medieval times and a red Gompas which house a spectacular collection of statues and thangkas. Overnight at guesthouse.

Today, we will trek to one of the major attraction center of this Trek. Lo Manthang was a principality up until 1950s. It consists of around 150 households and residences for lama gurus. We will trek through Lo-Gekar. It is the oldest Gompa in Nepal and older than the Samye Gompa of the Tibet. The trail is moderately easy. On reaching the walled city of Lo, we can visit the ancient temples and monasteries of the region. We can also visit the periphery of the king’s impressive palace, where still the king and queen of Lo- Manthang reside. He still serves as a king on all purpose in this isolated kingdom. We can take horses on lease and visit the beautiful valley. Overnight Guesthouse.

We will explore this mystical town of Lo-Manthang because only a day is not enough. We will visit the Namgyal Gompa which will take around 2 hours. This beautiful Gompa is situated on a hilltop, which is of high social, religious as well as legal importance as it serves as a local courthouse. After that, we can visit the village of Tingkhar, northwest of Lomanthang which consist of around 40 households. We will also visit Champa Lhakang which consists of a large Buddha statue and intricate Mandalas painted on the walls. We will spend the night in Lo-Manthang in an overnight Guesthouse.

We will exit the Lo-Manthang taking the upper highland trail. It will reward us with splendid views of Lo-Manthang and Charang Valley, with snowy mounts in the background. We will cross the Dhi Pass at 4,100m and reach Dhamkar, where we will spend the night at Guesthouse.

Day 12
Trek down to Syangbochen.

With Dhaulagiri and Nilgiri among other mounts standing tall in the background, we will hike down to Syangbochen. Via Rachen Gompa. Rachen Gompa is a mystical Gompa which grew by itself at the lap of a rocky cave. We will spend the night at Syangbochen at Guesthouse.

We will continue in our trail through steep ridges and hills alongside the pleasing sceneries of mountains and hills. We will trek to Tetang, the upper village of Chuksang which lies between two hills. It is a safe escapade from the fierce wind that hits the Kali Gandaki valley frequently. The night will be spent in Guesthouse.

Today is the last day of the memorable trek. We will go through the trail of Jharkot village and visit the Jharkot Monastery, Tibetan Herbal Medicine Center, and the ancient fortress of Jharkot which once was a palace. During descend towards Jomsom we can relish the view of Kali Gandaki Valley and Kagbeni Village. This is the gateway to Mustang. We will celebrate the last day of the trek in Jomsom with all the trekking staffs. We will spend the night at Guesthouse.

Day 15
Fly to Pokhara and rest.

After boarding a 20 minute long to Pokhara, we can spend the rest of the day in this beautiful lake city. You can explore Pokhara city, You can go boating in exotic Phewa, Rupa and Begnas Lake, visit the beautiful hilltop monastery, or go exploring in mystical caves. You can do some shopping for souvenirs and enjoy the night life in the vivacious city. Overnight at Hotel.

Day 16
Drive back to kathmandu.

After breakfast, we will travel to capital via Prithvi Highway. Once again the scenic bus ride will keep you refreshed throughout the journey. On reaching Kathmandu, you can once roam around this vibrant city and buy gifts and souvenirs to take back home. Overnight at Hotel.

The day has come to leave this remarkable country. Our representatives will transfer you to the airport from where you’ll board a flight to your next destination. Bid farewell to this country of Himalayans with plans to visit next time. Because, once is never enough! 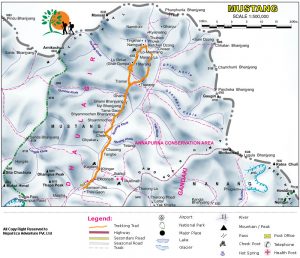 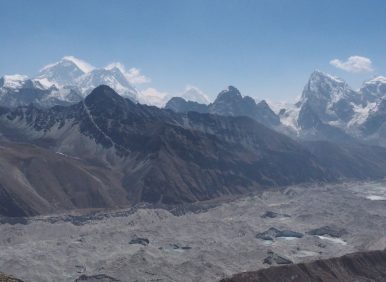 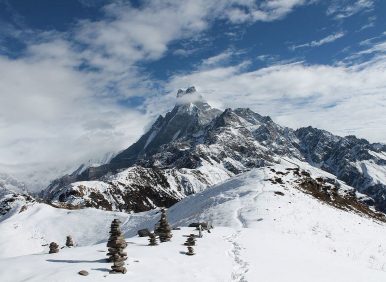 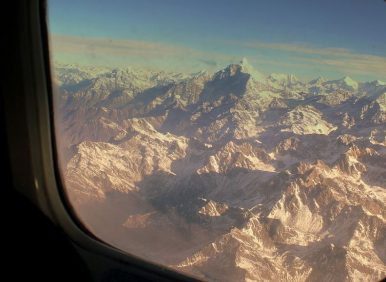 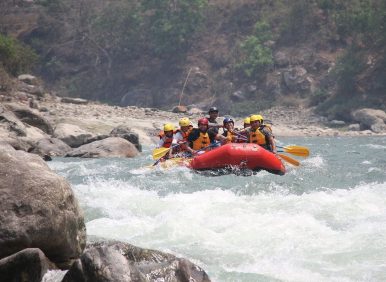 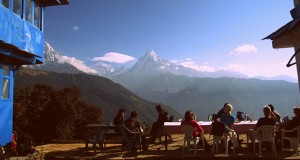 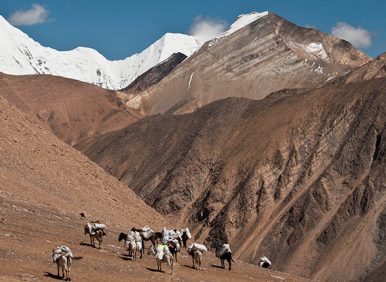